Experiments in the Concurrent Computation of Spatial Association on the KSR1 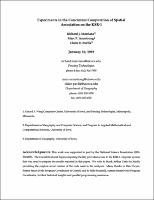 Spatial association measures, when computed for large data sets, have significant computational requirements. Parallel processing is one way to address these requirements. The design of parallel programs, however, requires careful planning since many factors under programmer control affect the efficiency of the resulting computations. In this paper, two strategies of parallel processing are described using as an illustration a measure of spatial association, G(d). An evaluation is made of the efficiency of the parallel implementations by varying the problem size and the number of processors used in parallel. The results obtained indicate that parallel processing can currently enable analysts to work in near-real-time with problems that range in the tens of thousands of observations; such problems require less than two minutes of execution time on the KSR1. Also super linear speed ups of almost 1500 are obtained for the computation phase of the problem.