The Rise and Demise of Industrial Agriculture in North Korea 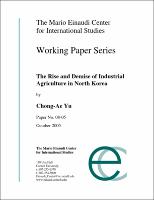 Many scholars suggest that North Korea’s agriculture collapsed in the mid-1990s because of one of the three causes: overall economic decline, deficiencies of the socialist collective system, or environmental disaster. In contrast to these conventional explanations that view North Korea as an idiosyncratic failure, this paper argues that North Korea’s agricultural crisis is attributable to the unsustainable nature of modern industrial agriculture, rooted in the worldwide modernization project of the past two centuries. From the outset, North Korea’s agricultural production had been predicated upon a high consumption of energy, petroleum-based chemicals, mechanization, and irrigation. North Korea’s uniqueness lies not in the industrial agricultural methods used but in the extremity of their extensiveness achieved. While the North achieved a substantial agricultural success for the first three decades thanks to these practices, it paid its early success with the collapse of the 1990s because these methods left an unsustainable level of physical and environmental externalities and because their insatiable need for inputs could no longer be met.