From Colonial State to Gatekeeper State in Africa 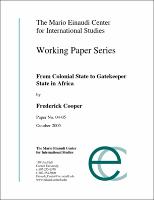 My essay interprets the malaise of African states based not on their supposed inherent characteristics (colonial legacy, culture), but on historical processes. In the decade after World War II, citizen mobilization opened up a range of possibilities—turning empire into federation, African unification—and put social and economic reform on the political agenda. In 1945, neither European powers nor African political movements saw independence as their primary goal. But by the late 1950s devolution of power to independent nation-states turned out to be the point on which African elites and colonial rulers could make a deal. Both saw the mobilization of citizens as a threat. The opening and closing of political possibilities left new states without the means to challenge the narrowness of colonial economies, fearful of demands for social change, and caught in a politics of clientage and exclusion to maintain state control of those narrow channels.