Magnetoconvection Dynamics in a Stratified Layer. I. 2D Simulations and Visualization (Revised 10/93) 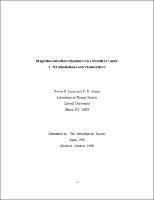 To gain insight into the problem of fluid convection below the solar photosphere, time-dependent magnetohydrodynamic convection is studied by numerical simulation of the magneto-anelastic equations, a model appropriate for low Mach numbers. Numerical solutions to the equations are generated on a two-dimensional Cartesian mesh by a finite-difference, predictor-corrector algorithm. The thermodynamic properties of the fluid are held constant at the rigid, stress-free top and bottom boundaries of the computational box, while lateral boundaries are treated as periodic. In most runs the background polytropic fluid configuration is held fixed at Rayleigh number R=5.44 times the critical value, Prandtl number P=1.8, and aspect ratio a=1, while the magnetic parameters are allowed to vary. The resulting dynamical behavior is shown to be strongly influenced by a horizontal magnetic field which is imposed at the bottom boundary. As the field strength increases from zero, an initially unsteady "single-roll" state, featuring complex time dependence, is replaced by a steady "traveling-wave" tilted state; then, an oscillatory or "sloshing" state; then, a steady two-roll state with no tilting; and finally, a stationary state. Because the magnetic field is matched onto a potential field at the top boundary, it can penetrate into the nonconducting region above. By varying the magnetic diffusivity, the concentrations of weak magnetic fields at the top of these flows can be shown to be explainable in terms of an advection-diffusion balance.