Update on Tools for Parallel Programming at the CNSF 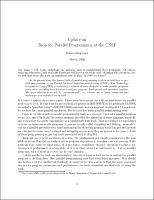 Not many CNSF users undertake the arduous task of parallelizing their programs. Of course, training, education, and available hardware will have a lot to do with changing this situation, but we feel that tools also have an important role to play. In 1989, we wrote: "At the present time, the general lack of parallel programming tools is an inhibitor to parallel programming at the Cornell National Supercomputer Facility (CNSF). The Technology Integration Group (TIG)is evaluating a number of tools designed to make parallel programming easier, including tools for source analysis, program development and execution analysis. The more effective tools will be 'mainstreamed', i.e. turned over to users, integrated into workshops and consulted on by staff." This provides an update to that status report. The major section ofthis paper describes Tools for Parallel Programming, divided into 12 categories. Each category is summarized in pretty much the same way as in 1989, and then new status and prospects are discussed. The paper concludes with some comments on hybrid program development systems andthe workstation environment. The appendices contain a table of all the tools and list acronyms, names, and institutions.