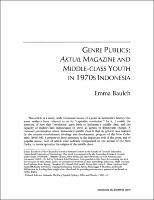 This article attempts to change our thinking about the formation, development, and growth of the middle class(es) in Indonesia during the early Suharto regime. In the dominant story about the formation of the Indonesian middle classes, a particular configuration of economics and politics caused the formation of the middle class, and shaped identities, values, and behaviors. According to analysts, these middle classes were heavily dependent on the state, and politically ineffectual. To challenge that notion, this essay studies how the pop music magazine Aktuil (1967–84) addressed its readers, and shows how this treatment allowed certain people to feel as if they were part of a tangible social entity that inhabited a middle social space, between the state and the masses. This is an important and necessary intervention that recognizes the significance of media and popular culture in the construction of identities. The author positions Aktuil in the context of the radical reorganization of the press and of popular music, which enabled the quiet evolution of the Indonesian middle class—a cohort constituted not only by musical taste, but also by the practice of reading. Aktuil gave rise to a virtual social entity heralded into being by overlapping modes of address, that is, those that touched not only on a rhetoric of print, but also on discourses of popular music genres. By proposing that the middle class was a virtual entity, the imagination of which was enabled by the reorganization of the press and of popular music, this essay departs from a dominant perspective that attributes to the state a pivotal role in the tangible growth of the middle class in the 1970s.