Future Governance of the Arctic: Press, Policy and the Arctic Council 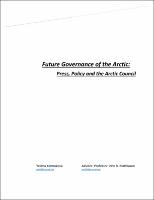 The changing situation in the Arctic due to global warming has prompted media coverage of a supposed “scramble for the Arctic,” an “Arctic boom,” or an “Arctic Bonanza.” Some even go further, deploying the rhetoric of a “New Cold War,” predicting an inevitable clash between the United States and Russia over interests in the region. The press coverage in both countries over the past decade reflects this new sensationalism. The academic literature unequivocally confirms that the press exerts substantial influence on governmental policy makers, and vice versa. However, while scholars agree that international organizations (IOs) are essential to shaping policies, the existing literature lacks research on media’s relationship with IOs, which often struggle to obtain the coverage and publicity they deserve. In particular, the Arctic Council has provided an effective platform for constructive dialogue and decision making involving the United States and Russia. Accordingly, despite disagreements in other regions of the world, the two global powers have managed to cooperate in the Arctic – notwithstanding recent media coverage painting a different and incomplete picture. This project surveys the media coverage of the Arctic over the past decade in Russia and the U.S. and its correlation with the Arctic Council’s activities. The analysis draws upon two prominent news organizations in Russia (Kommersant and Izvestiya) and two in the U.S. (the New York Times and the Wall Street Journal), as well as the Arctic Council’s press releases and social media presence from June 2006 to June 2017. The paper finds that there is a clear disconnect between media coverage of the region and the Arctic Council’s activities, recommending that the media pay more attention to the organization, particularly since it is the only prominent platform for international cooperation in the Arctic. More research should be done evaluating the effectiveness of the Arctic Council’s social media presence.