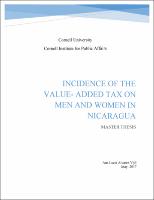 This research pretends to be a contribution to the growing literature on the differentiate incidence effects of indirect taxation in developing countries on men and women. By using data from the Household Survey (EMNV) of Nicaragua from 2014 (INIDE, 2014), the research develops an indirect tax incidence analysis to determine the differences in the magnitude of tax income paid in concept of Value- Added Tax (VAT) as a proportion of their total income, based on the sex composition of the household. The results suggest that there is implicit gender bias in the established VAT structure for preferential treatment of goods and services which, together with different pattern of consumptions within households for men and women associated with gendered social roles, results in a higher incidence of the tax against female majority households compared to male majority ones, for both, rural and urban areas. A revision of the structure of preferential VAT treatment of important household consumption goods and services, via either exemptions, zero-rating or differentiated rates, may have important effects in reducing the gender differences in the incidence of the VAT, as well as in protecting poor households, which otherwise bears disproportionate higher share of the tax burden.