"We the (Chinese) People": Revisiting the 1945 Constitutional Debate on Citizenship 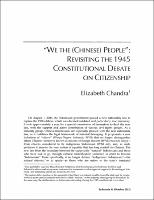 This article looks at the debate on citizenship at the constitutional convention on the eve of Indonesia’s independence in 1945. In that defining moment, the definition of “citizen” eventually adopted by the Constitution identified “indigenous Indonesians” as the principal component of the nation, making a distinction for the first time between indigenous citizens and citizens of foreign descent. This distinction would come to haunt the Chinese minority and complicate their integration in postcolonial Indonesia, and was blamed for much of the political inequality that they had to endure. The recent passage of the 2006 Nationality Law, and particularly its redefinition of “indigenous” to incorporate the Chinese, has been hailed as a groundbreaking step towards equality. But a close examination of deliberations on citizenship at the 1945 constitutional convention reveals some surprises, including scepticism on the part of the Chinese delegates with regard to Indonesian citizenship.