From Foe to Partner to Foe Again: The Strange Alliance of the Dutch Authorities and Digoel Exiles in Australia, 1943-1945 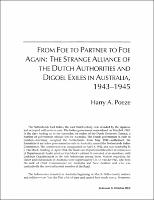 In March 1943, Boven Digoel, the notorious Dutch internment camp in the New Guinea jungle, was evacuated. The inmates, some five hundred political prisoners, the majority of them communists, were brought to Australia. The highest Dutch official there, unconventional Ch. O. van der Plas, employed them for anti-Japanese propaganda activities, and endorsed and stimulated the establishment of Serikat Indonesia Baroe (SIBAR, Association for a New Indonesia), an organization intended to become in the post-war Indies a national party, with official Dutch backing. He consciously sought the support of the exiles, in the SIBAR partnership, that went far beyond other colonial–communist cooperation endeavors in Southeast Asia. This alliance between Dutch authorities and Indonesian communists was conveniently forgotten after the Japanese surrender.