Housing the Margin: Perumahan Rakyat and the Future Urban Form of Jakarta 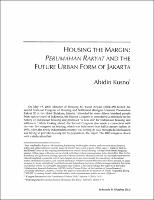 "Housing the Margin” analyzes current national housing policies for the urban poor and their effects on citizenship and urban form in Jakarta. It looks at the way in which the pro-poor housing program has been integrated into urban renewal, land certification, and “slum free initiatives” of the city. It argues that the new housing program for the poor operates under a condition of neoliberalism that demands an integration of the land market, a displacement of the poor to the fringes of the city, and a change in the future geography of Jakarta.