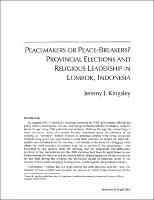 The first direct election of a provincial governor on the eastern Indonesian island of Lombok during 2008 precipitated concerns about an outbreak of politically motivated communal violence. However, violence did not eventuate. I argue that cooperation between state officials and non-state religious leaders was central to sustaining social harmony. Local Islamic religious leaders, Tuan Guru, were pivotal in facilitating grassroots efforts to avoid conflict during the 2008 gubernatorial elections. This article also acknowledges that Tuan Guru can cause social and political instability if they desire. Careful groundwork for elections can potentially avert communal or political violence. As governments across Indonesia prepare for new rounds of national, provincial, and local elections in the coming years, the lessons learned in Lombok are instructive.