Protecting the Dragon: Dutch Attempts at Limiting Access to Komodo Lizards in the 1920s and 1930s 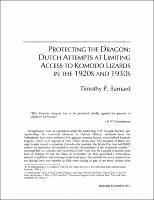 In 1912, Dutch scientists announced the existence of large lizards on Komodo Island in the Dutch East Indies. By the 1920s, these large lizards became the focus of intense collecting efforts on behalf of zoos and natural history museums, which desired the publicity and status inherent in displaying such a “celebrity species.” This article focuses on Dutch attempts to limit access to a little understood animal, which was located on the margins of their authority. By the 1930s, this led to new understandings about the role of wildlife reserves in the colony and thus became vital in the development of early environmental conservation in Indonesia.