Betawi Moderen: Songs and Films of Benyamin S from Jakarta in the 1970s—Further Dimensions of Indonesian Popular Culture 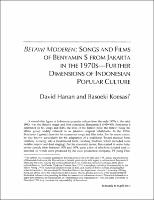 Benyamin S (1939–95) emerged as a major figure in Indonesian popular culture in the early 1970s as a singer and film comedian, and this study explores his songs and films. The article examines Benyamin’s adaptation of a traditional Betawi musical form, Gambang Kromong, into a modernized form, Gambang Moderen; his representation, in both songs and films, of Betawi communities, particularly communities of the poor; his creative use of bahasa Betawi as a medium for humor and as a language most expressive of community; and his capacity for pastiche, which extends to include an ironic Indonesian perspective on icons of Western popular culture. The article also explores the implicit critique, in some Benyamin S films, of social changes occurring at the time of rapid economic development in Jakarta under Suharto’s New Order in the 1970s.