The Perfect Policeman: Colonial Policing, Modernity and Conscience on Sumatra’s West Coast in the early 1930s 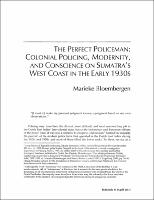 This article aims to show how studying the colonial police in the Dutch East-Indies—in this case, a political policeman of Minangkabau origin, working in the west coast of Sumatra during the 1920s–1930s—can further our understanding of both the functioning of the colonial state and the multiple meanings of modernity and radicalism in colonial society. The essay explores the ways in which the writings of a particular policeman, Roesad gelar Soetan Perpatih, illuminate the concepts of civilization, modernity, and political progress that circulated and functioned in the late-colonial state. By moving the perspective from Indonesians being policed to Indonesian policemen, the article addresses the fact that the local search for progress and modernity did not only entail anticolonial nationalism or radicalism, but could also imply that the person searching would become involved in colonial politics. This also implied—as the Roesad’s case makes clear—becoming entangled in the contradictions of (racial) difference and (interdependent) involvement that characterized the colonial state.