Stalin and the New Program for the Communist Party of Indonesia, with an introduction by Ruth T. McVey 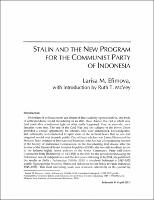 For more than two generations, historians have been asking themselves whether Moscow participated in the organizational and ideological revival of the Indonesian Communist Party (PKI) in 1951–53. Some authors believe that the Indonesian communists defined the new party strategy and tactics independently from either Moscow or Beijing. Newly released documents show that Stalin played an active and personal role in the process of discussing and refining a new program for the PKI. The main ideas Stalin expressed during his discussions with the Indonesian communists were incorporated into the new PKI program adopted in 1954, as well as in articles and speeches of PKI General Secretary Dipa Nusantara Aidit.