The Free Aceh Elections? The 2009 Legislative Contests in Aceh 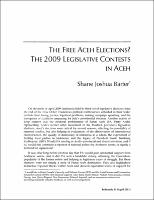 The 2009 Indonesian Legislative elections were a significant test for Aceh’s peace and political autonomy, a moment of democratic transition for the troubled province. This article studies the 2009 elections in Aceh, suggesting that while the former rebels scored impressive support, the contests were not simply illustrations of Partai Aceh (PA) dominance. Firstly, PA success in local elections was confined to districts along the northeast coast. Around Banda, on the west coast, and in the Southeast, PA won bare pluralities, while in the ethnically heterogeneous districts of the interior and southwest, PA fared poorly, losing to national parties. Secondly, the PA victory has overshadowed the equivalent levels of support won by President Yudhoyono’s Partai Demokrat in Aceh’s national ballot. All told, Aceh’s Elections provide a powerful lesson in terms of regional autonomy and post-conflict elections: the former rebels and incumbent national leaders simultaneously won strong mandates, showing that the rewards of peace need not be zero-sum.