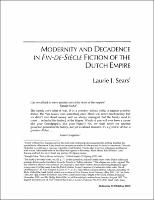 Themes of empire and sexual degeneracy permeate the works of fin-de-siècle authors Tirto Adhi Soerjo and Louis Couperus, producing dread and melancholia in the work of Couperus and the anxiety and enchantments associated with capital, modernity, and fashion in the fiction of Tirto, who wrote until he was disowned by the colonial administration, attacked by his enemies, and exiled from Java. In Couperus’s novels, discussed in this essay, melancholic repetitions obscure the connections between the decadence of both Dutch and Indies colonial bureaucracies and phantasies and phantoms of empire.