Nahdlatul Ulama and the Killings of 1965–66: Religion, Politics, and Remembrance 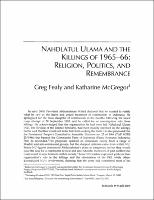 The essay examines the narratives Nahdlatul Ulama (NU) promulgated to explain its role in the mass killings of Partai Komunis Indonesia (PKI) members in 1965–66. Drawing on interviews and documents, the authors describe the history of antagonism between the NU and PKI and the role NU members played in the killings. It also shows how the organization perceived and articulated Indonesian communists as a threat to the Muslim community and to Islam itself. In the second half of the article, the authors reflect on how the NU and individuals within the NU have dealt with the legacy of 1965 over the last ten years.