Another look at the Jakarta Charter controversy of 1945 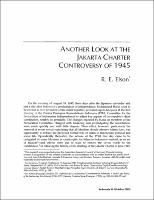 This article retraces the history of the drafting of the Jakarta Charter, the proposed preamble to Indonesia’s constitution, in June 1945, the debates surrounding its significance, and the August 18, 1945, pruning of its seven words stipulating that all Muslims should observe Islamic law. It argues that later controversies concerning the removal of the seven words have seriously misunderstood the nature of the Charter and of the fraught politics surrounding its development and, moreover, that Hatta's actions in securing key amendments to the draft constitution were themselves panicked, unnecessary, and even counter-productive.