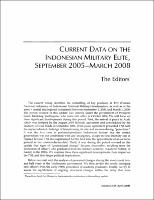 This essay and list of Indonesian military officers identifies the reshuffling of key positions at TNI (Tentara Nasional Indonesia, Indonesian National Military) headquarters, as well as at the army’s central and regional commands between September 1, 2005, and March 1, 2008. The period covered in this update was entirely under the government of President Susilo Bambang Yudhoyono, who came into office in October 2004. The analysis focuses on the arrival of peace in Aceh (August 2005); the appointment of an air force general as the commander-in-chief of TNI; and signs of “generational change” that became discernible during this period, resulting from the promotion of officers who graduated from the military academy (Akademi Militer, or Akmil) in the 1980s.