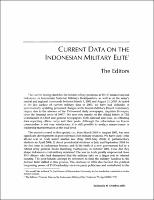 The essay analyzes civil-military relations and the impact of personnel changes within TNI between March 1, 2003 and August 31, 2005. It examines particularly the hard-line trend of the army led by Gen. Ryamizard Ryacudu, as evident in the war in Aceh under the Megawati administration; the role of the TNI during the legislative-presidential elections in 2004; and efforts by the new president, Susilo Bambang Yudhoyono, to reconstruct TNI leadership and its political positioning. The essay is accompanied by a list of current officers and their posts.