Morality and Movies: What are People Thinking? A Content Analysis of Informal Movie Reviews Online 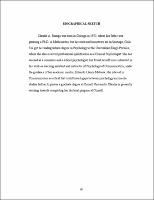 It has long been assumed that movies can have an influence on moral development and moral thought. The content analysis presented here examines whether and how people who post informal reviews online think about moral issues related to the films, and how that fits with theories about moral development and the role of moral thoughts in entertainment. The results indicate that, in this context, conscious thoughts about moral issues are scarce, although they increase significantly when a movie is morally ambiguous. Most of the comments about moral issues reflect on the possible moral effects on others rather than on the self. This result casts some doubt on the assumption that films can be a tool for moral self-development. Other results show that moral comments about elements beyond the plot and characters (creators of the film, general audience and the world at large) are almost as frequent as those about the storyline, and that people use the level of moral complexity of a film to evaluate its overall quality. It would appear that the role of moral thoughts is more varied than previous theoretical models indicate. Future research in the area should perhaps incorporate considerations about moral ambiguity of a movie, moral thoughts beyond plot issues, and different roles that moral thoughts play in audience?s interpretations of movies.