Healthy, Wealthy, and Wise? The Link Between Ideology and Health in America 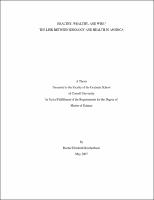 The purpose of this study is to explore the relationship between ideological beliefs and individual self-reported health in America between the years 1993 and 2004. A distinction between particular ideologies and ruling ideology is made. Particular ideologies are created by social interaction as a product of history and are used as tools for categorizing and structuring observations, experiences, ideas, and action. Individuals need the structures provided by particular ideologies both to understand and to act upon their world. A ruling ideology develops when those in power knit together multiple particular ideologies to create a unified system of thought that presents an easily accepted and internalized set of normative behaviors, thought-patterns, and ideals, in order to protect their social position. Preliminary data analysis revealed that the majority of Americans believe they have good health. These results aided in the development of several research questions. If ideology is as pervasive as suggested by the literature, then is there anything about the current ideologies that precipitate widespread belief by individuals that they have good health? Could ideology give a cohesive worldview to individuals, thus reducing their stress of being outside the norm? Or, could ideology provide individuals with normative prescriptions for behaviors that are good for their health, such as reducing smoking and binge-drinking? Do the benefits of a cohesive worldview or of behavioral health norms outweigh the consequences of the possible false consciousness that may result simultaneously? Four propositions suggesting connections between ideology and self-reported health are evaluated using binary logistic regression analyses and data from 1993 through 2004 contained in the General Social Survey. I predicted that respondents who had internalized the dominant particular ideologies or ruling ideology of the era would have better health than those who adhered to a different paradigm. Health is measured as poor or good perceptions of self-health. The findings of the analyses show moderate support for three out of four of my propositions. Economic and social ideological beliefs have a significant relationship with self-reported health net of demographic controls and material indicators. Using a composite scale to give more breadth to the measurement, religious ideology is also seen as a predictor of self-reported health. The fourth proposition concerning ruling ideology found little support using this dataset. Despite the support garnered for psychosocial theory through the significance of the variables indicating particular ideology, support for neo-materialist theory was also revealed. In fact, the material indicators showed the strongest and most robust relationships with health status. In many cases, they overwhelmed the other variables. However, in contradiction to epidemiological research, health behaviors do not contribute to explaining to self-reported health. The limitations of the study and the implications of the results in light of the research questions are discussed at length in the conclusion.