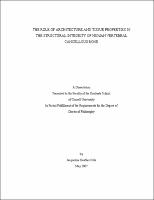 Age-related disorders of bone metabolism like osteoporosis may compromise structural integrity of bone and result in fragility fractures, particularly at cancellous bone sites. Several factors contribute to cancellous bone strength, including bone density, architecture, and material properties. Clinical assessment of bone density using dual-energy X-ray absorptiometry (DXA), which is somewhat distorted by the fan-shaped X-ray beam, does not fully account for fracture incidence and only partially correlates with bone strength. Spatial variations in trabecular architecture captured by micro-computed tomography (microCT) have been related to structural behavior using microstructure-based models. However, the impact of material variations is not well understood and should be investigated. DXA fan-beam magnification was quantified by scanning aluminum rods at several distances above the X-ray source. Projected area and bone mineral content decreased by 1.6-1.8% per centimeter distance above the source, indicating that changes in girth over time would artificially reduce DXA measurements and obscure actual gains associated with growth or interventions. The ability of DXA to predict bone architecture and material properties was assessed in thoracolumbar specimens from 21 cadavers. T11-L4 was scanned using DXA, and cancellous bone cores drilled from the center of T12 and L2 were scanned at 17 microns using microCT and then compressed uniaxially to failure. DXA and microCT bone mass correlated similarly with cancellous bone stiffness and strength in females but not males. DXA could not account for variations in architecture detected by microCT, particularly in the thoracic spine, for either males or females. MicroCT scans may better assess bone strength in the thoracic spine and could replace DXA scans altogether if measurements could be made non-invasively, accurately, and affordably. Spatial variations in architecture and material properties were examined with architecture- and material-based finite element (FE) models developed from microCT scans. Homogeneous and heterogeneous material models were examined. FE models were improved by heterogeneity, whether between subjects using specimen-specific uniform properties or within subjects using spatially varying properties. Apparent stiffness was the same for specimen-specific models, regardless of variations in tissue modulus. The mean tissue modulus, rather than its distribution, appears to drive the overall mechanical behavior for vertebral cancellous bone.