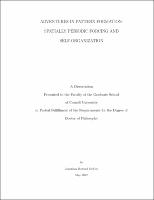 This dissertation describes an experimental exploration of pattern formation in a convecting fluid subjected to spatially-periodic forcing. The flow is driven thermally in a high-precision compressed gas apparatus and visualized using shadowgraphy. The forcing is introduced by microfabricating a regular pattern of polymer ridges on the lower boundary of the convection cell. We frustrate the system by choosing a forcing wavelength which lies outside of the balloon of periodicities for which unforced flow patterns are stable. This arrangement, even for polymer ridge heights much less than the thickness of the fluid layer, has dramatic and unexpected consequences for the system?s pattern-forming dynamics. Available theoretical work on spatially periodic forcing of thermal convection is applicable only close to onset. We rederive an important qualitative prediction that, due to the forcing, there should be convection present for all applied temperature differences. Quantitative comparisons with experimental data confirm that this theory correctly describes the physics of the spatially forced patterns near the threshold defined by the onset of convection in the unforced system. Near the critical point, the pattern is phase-locked to the forcing and stationary. At larger applied temperature differences, we find a wealth of complex dynamical phenomena. In particular, where the pattern starts to break free of the forcing, we observe a completely new and unexpected phenomenon: the pattern uses mobile, highly localized structures to reassert its preferred periodicities. In this regime, the dynamics blend spatiotemporal chaos with the self-organization of robust, localized crystalline structures. We use a variety of techniques inspired by condensed matter physics, nonlinear systems, and pattern formation to characterize this remarkable twist on the classic theme of order within chaos. Then, reinterpreting these ?crystalline chaotic? dynamics as an intermediate phase mediating the emergence of spiral defect chaos in the spatially forced environment, we give a more complete tour of the phase space, placing special emphasis on localized structure formation, on the secondary instability of the phase-locked pattern, and on resonance structures in the chaotic patterns.