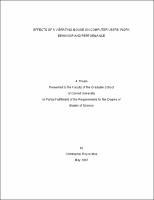 Frequent brief rest breaks, known as micro-breaks, have been shown to benefit computer users by reducing fatigue and possibly preventing musculoskeletal disorders. Various methods of reminding users to take rest breaks have been developed. Initially, efforts focused on the use of break reminder computer software, although potentially this may be disruptive to work patterns. More recently, micro-break reminders have been incorporated into computer equipment and these have been indexed to work activity, and this approach may offer less potential for disrupting work activities. A computer mouse has been developed that vibrates in the user's hand after 10 seconds of inactivity. The vibration is intended to remind the user to rest his or her hand in a neutral position while not actively engaging the mouse rather than maintaining a grip on the mouse that requires static muscle contraction. A laboratory experiment was conducted to test this vibrating mouse against a conventional mouse to see how it affected subjects' task performance, task behaviors, and mouse preference. It was hypothesized that the vibrating mouse would increase the number of times subjects removed their hands from the mouse, be minimally disruptive and have no adverse effect on task performance. The study also explored what subjects did with their hand when this was removed from the mouse. Eleven female and seven male subjects participated in the experiment. Use of the vibrating mouse (experimental condition) was compared to use of a conventional mouse (control condition) for five consecutive tasks. The first three tasks required the finding and correcting of duplicate words, the finding and correcting of duplicate sentences and the finding and correcting of misspelled words from text passages. The final two tasks were a reading comprehension task, where the subjects answered four multiple-choice questions about a text passage, and a composition task in response to a business scenario. Subjects were videotaped to collect data on their behavior while completing the tasks under both conditions. Task time and number of errors were collected as performance measures. User preferences and musculoskeletal discomfort were gathered using two questionnaires, one administered pre test and one post test. No differences were found in performance between the two conditions. The vibrating mouse induced more positive task behaviors than the conventional mouse, including significantly more resting behavior (p=0.02) and slightly more hand removals (p=0.06). The vibrating mouse, however, also induced significantly more negative task behaviors than the conventional mouse, such as increasing the frequency of unsupported hand hovering (p=0.00). Nine subjects found that the vibrating mouse was disruptive to their performance during the duplicate word and reading tasks; and eight found that the vibrating mouse was disruptive during the duplicate word task. The effectiveness of the mouse seemed to correspond to task type and also to subjects' mouse use technique. Because of technological limitations and a desire to limit extraneous distractions to the subjects during the tasks, the vibration occurrence data was collected by subjects' self reporting the number of vibration occurrences they experienced. This subjectiveness may have compromised the reliability of the vibration frequency data. The vibrating mouse shows promise but more research is needed to understand the conditions under which a vibration occurs and therefore when a user would gain benefits from this mouse. The effects of task type and user technique need to be examined in more detail to determine the nature of these effects before recommendations can be made as to the proper implementation of the vibrating mouse.