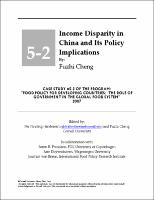 Case Study #5-2 of the Program: “Food Policy For Developing Countries: The Role Of Government In The Global Food System”

China’s economy has witnessed considerable achievements since economic reforms were initiated in 1978. Average overall gross domestic product (GDP) has grown approximately 9 percent annually during the past two decades. Coinciding with this rapid economic growth is a marked increase in income inequality. In recent years China has had alarmingly high income disparity levels and has become one of the countries with most unequal income distribution in the world.Rising income inequality is considered one of the effects of the economic reforms. The move from egalitarianism to more market-based income determination has created both winners and losers within China’s population. In urban areas, the restructuring of the state-owned enterprises and the development of a vibrant private industrial and service sector, with wages and employment determined entirely outside the old socialist labor bureaus, dramatically changed the returns to human capital and skill. This change led to highly unequal earnings and incomes among urban residents. In rural areas, the introduction of the household responsibility system and the establishment of off-farm employment opportunities based on township and village enterprises generated great differences in income among farmers and the nonfarm rural population.Other policy measures implemented before and during the reform also contributed to income disparity in China. First, the heavy-industry-oriented development strategy, which aimed at promoting industrial growth within cities, greatly suppressed the agriculture sector and created a large urbanrural income gap. This gap was further widened during the reform period by a set of urban-biased fiscal and monetary policies. Second, a flawed sectoral and regional development policy has caused income disparity to rise among China’s provinces. Third, the household registration system that limits labor mobility has aggravated the impacts of both sectoral- and regional-biased policies on spatial income disparity. Finally, the lack of social security has worsened income distribution in both urban and rural areas.Large income disparities now exist between the urban and rural residents, between different regions, and among the urban and rural residents themselves. Rising income disparity is a source of concern to the government because it causes widespread discontent and social protest. For long-term economic prosperity, the country should find a way to balance the policy that “let a few people get rich first” and the classical beliefs in egalitarianism. Income disparity in China has many dimensions, and only when the country is capable of tackling all of them can it develop a sustainable basis for continuing economic growth. A number of policy options are envisioned that would provide solutions to the problem.Your assignment is to make policy recommendations to the Chinese government to help reduce income disparity in this country.

©Cornell University, Ithaca, New York. All rights reserved. This case study may be reproduced for educational purposes without express permission but must include acknowledgment to Cornell University. No commercial use is permitted without permission.