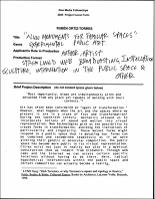 Art has often been considered an "agent of transformation." However, what happens when the art and the spaces where we present it are in a state of flux and transformation? During the twentieth century, mechanics allowed us to incorporate notions of speed and motion into visual representation. New technologies give us the possibility to create forms in transformation, avoiding the limitations of particularity and singularity. These mutant forms might respond to a public space that is mutating too. Forms can be combined and recombined seamlessly as if we were altering their genetic or molecular composition. The public space has become more public in its virtual representation. Cities exist not just in reality but also in a mythical construction that we inhabit from elsewhere. Through web cams and the Internet we can access certain specific locations without having to be there. Here, radical hypothetical interventions within the public space and certain communities can actually become a reality.