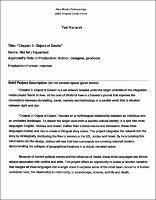 "Chapter 3: Object of Desire" is a net artwork created under the larger umbrella of the integrated-media project World of Awe. At the core of World of Awe is a traveler's journal that explores the connections between storytelling, travel, memory and technology in a parallel world that is situated between night and day. "Chapter 3: Object of Desire," focuses on a mythological relationship between an individual and an uncharted landscape. To detach the single voice from a specific cultural identity, it is split into three languages: English, Hebrew and Arabic. Rather than a literal one-to-one translation, these three languages overlap and mix to create a trilingual story space. The project integrates the network into the story by strategically distributing the files to servers in the US, Jordan and Israel. By incorporating this information into the design, visitors will see that their commands are crossing national borders, demonstrating the collapse of geographical locations in a virtual, narrated space. Because of current political events and the influence of media, these three languages are almost always associated with conflict and strife. This project offers an opportunity to create a counter narrative that merges all three languages into a single voice to express some of the most basic concerns of human existence: love, the relationship to one's body, to a landscape, a home, and life and death.