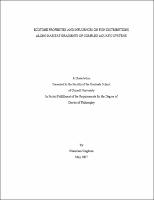 Ecotone properties (formation and function) were studied in complex aquatic systems in New York State. Ecotone formations were detected on two embayment-stream gradients associated with Lake Ontario during June?August 2002, using abrupt changes in habitat variables and fish species compositions. The study was repeated at a finer scale along the second gradient during June?August 2004. Abrupt changes in the habitat variables (water depth, current velocity, substrates, and covers) and peak species turnover rate showed strong congruence at the same location on one gradient. The repeated study on the second gradient in the summer of 2004 confirmed the same ecotone orientation as that detected in the summer of 2002 and revealed the ecotone width covering the lentic-lotic transitions. The ecotone on the second gradient acted as a hard barrier for most of the fish species. Ecotone properties were determined along the Hudson River estuary gradient during 1974?2001 using the same methods employed in the freshwater system. The Hudson ecotones showed both changes in location and structural formation over time. Influences of tide, freshwater flow, salinity, dissolved oxygen, and water temperature tended to govern ecotone properties. One ecotone detected in the lower-middle gradient portion appeared to be the optimal zone for fish assemblages, but the other ecotones acted as barriers for most fish species. A spatially explicit abundance exchange model (AEM) was developed to predict distribution patterns of five fish species in relation to their population characteristics and habitat preferences across the lentic-lotic ecotones on the two freshwater gradients associated with Lake Ontario. Preference indexes of each target fish species for water depth, water temperature, current velocity, cover types, and bottom substrates were estimated from field observations, and these were used to compute fish habitat preference (HP). Fish HP was a key variable in the AEM to quantify abundance exchange of an associated fish species among habitats on each study gradient. The AEM efficiently determined local distribution ranges of the fish species on one gradient. Results from the model validation showed that the AEM was able to quantify most of the fish species distributions on the second gradient.