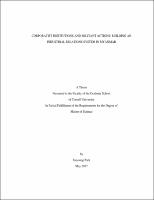 Drawing on data from archives and fieldwork in Myanmar, a country in political transition from a five-decade authoritarian regime to a civilian one, this study explores the reasons for a prevalence of corporatism at the early stage of reforms and a divergence from other Asian countries that experienced transitions accompanied by labor militancy and later embraced corporatism with political power shifts to elected pro-labor parties. This study argues, first, that corporatism prevails in the rhetoric of the labor movement and in the industrial relations institutions while labor militancy has increased; second, corporatism in Myanmar has few historical traces but has recently been promoted primarily by the International Labour Organization (ILO); and third, while corporatism failed to bring about industrial peace, the rhetoric may limit the potential of the labor movement to develop and exercise political power by limiting unions’ arena in economic concerns.