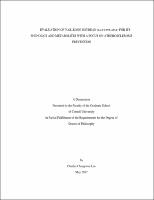 Increasing intake of healthy or functional foods is the promising way to prevent noncommunicable diseases especially cardiovascular diseases (CVDs) which have been the number one cause of death in globe. Soybean (Glycine max) has been supported by significant scientific evidence particularly on the risk reduction of CVDs. With the aim of seeking a competitive functional soybean ingredient, a small black soybean cultivar with a green embryo commonly called Yak-Kong (YK) in Korea was chosen based on its physical characteristics and historical background and was evaluated its phenolics and their metabolites with a focus on prevention of CVDs. First, antioxidant activities and phenolics of YK were analyzed. In comparison to common yellow and black soybean cultivars, YK contained significantly higher concentrations of antioxidants, particularly in its seed coat. A comprehensive phenolic composition analysis revealed that proanthocyanidins and isoflavones were the major phenolic groups in YK. Potential effect of proanthocyanidins and isoflavones on prevention of CVDs was further evaluated with their prospective metabolites using a monocyte-endothelial cell adhesion in vitro assay. The present study found that 5-(3’,4’-dihydroxyphenyl)-γ-valerolactone (DHPV), one of the previously reported major human microbial metabolites of proanthocyanidins, strongly attenuated adhesion of THP-1 monocytes to tumor necrosis factor (TNF)-α-stimulated human umbilical vein endothelial cells (HUVECs). DHPV downregulated TNF-α-stimulated expressions of vascular cell adhesion molecule-1 (VCAM-1), monocyte chemotactic protein-1 (MCP-1) and activation of nuclear factor-κB (NF-κB), which all are associated with atherosclerosis. Additionally, several hydroxylated metabolites of isoflavones in addition to their precursors were target-analyzed in the plasma of rat fed with YK embryo extract. 7,8,4’-trihydroxyisoflavone (7,8,4’-THI), a hydroxylated daidzein metabolite, was exclusively detected with the highest amount (average 5.1 μM) and average 574.3 ± 112.8 area under the curve within 240 min. In contrast to daidzein and daidzin, 7,8,4’-THI significantly prevented adhesion of THP-1 monocytes to TNF-α-stimulated HUVECs via downregulating expressions of VCAM-1, MCP-1 and phosphorylation of I Kappa B Kinase (IKK) in NF-B signaling pathway. In sum, YK has promising potential for further development as a functional food source targeted at atherosclerosis prevention.