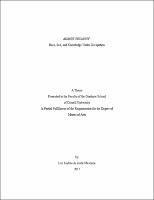 This thesis explores textual and visual representations of the military prostitution during the Occupation in Japan, the pan pan girl. Many works on representations of pan pan girls in postwar literature and film interpret the pan pan girl as a symbol of Japan’s defeat and the trauma of the Allied Occupation. Nevertheless, these popular interpretations fail to take into account the way that the figure of the pan pan girl revealed, for both the U.S. and Japan, a tenuous politics of race and sexuality that often dismantles an accepted narrative about the Occupation and the postwar. The pan pan girl, I will argue, is a figure that acts as a point of attachment for a collective fantasy on racial and gender relations during the immediate postwar. My discursive analysis looks to explain the components of what I see as a rhetorical crossroads in the framings of sex and race not only in fictional representation, but also in the context of academic representation. An inquiry into the possibility of understanding representation beyond national concepts of the figure of the pan pan, “Akarui Uncanny” draws from concepts and theories in psychoanalysis, trauma studies, translation studies, and postcolonial feminist criticism to develop upon narratives and analyses of representations of postwar military prostitution.