THE ENVIRONMENTAL IMPACT OF METRO EXPANSION ON AIR QUALITY IN BEIJING, CHINA 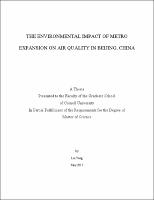 Air pollution has been a very serious problem in China, and a significant portion of the pollution comes from the automobiles. Expansion of the public transportation system can potentially alleviate pollutions by diverting travelers from their vehicles. In this study, we conduct a spatial analysis to quantify the impact of subway expansion on air pollution in Beijing. The data we use consists daily monitor level Air Pollution Index (API) during 2008 to 2012, and spatial data of the geographic location of 27 monitors and 127 subway stations. We use the difference-in-difference approach for the analysis and divide the monitors into two groups based on their closest distances to the newly opened subway line. We find that after the subway opens, the API decreases significantly by 20.9% within a 30-Weekday window. The reduction effect on API maximizes at the first 10 weekdays after opening and fades out after 60 weekdays.