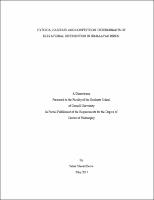 An important aspect of montane bird ecology is that most species have limited elevational distribution. We have a very poor understanding however, of the mechanisms that drive this limited elevational distribution in birds. In my dissertation, I investigated hypobaric hypoxia, interspecific competition and habitat loss as drivers of distribution in montane birds in the Himalayas. The first chapter is an introduction to the topic of elevational distribution in birds and the motivation behind the following chapters. In the second chapter we show that annual elevational movement patterns of Himalayan birds predict their strategy to cope with hypobaric hypoxia. We demonstrate that while elevational migrants increase hemoglobin concentration by increasing the volume of erythrocytes in their blood, sedentary high-elevation residents increase hemoglobin concentration by increasing mean cellular hemoglobin concentration in a comparative study of 15 passerine species. In the third chapter, I used song playback and feeder experiments to test the role of interspecific competition in driving the elevational distribution of green-backed and cinereous tits in the western Himalayas. I show that although green-backed tits are behaviorally dominant over cinereous tits, cinereous tits live at high elevations by occupying habitats vacated by green-backed tits. In the fourth chapter, I used the results from the behavioral experiments to predict the spatial distribution of cinereous and green-backed tits in a landscape. Using occupancy modeling, we show that green-backed tits are dependent on forests for breeding sites at their elevational lower distributional limit and might be adversely affected by habitat loss. Cinereous tits, a common low elevation species on the other hand, occupy human-modified habitats and are likely expanding their elevational range upslope due to anthropogenic habitat modifications. In the fifth chapter, we undertook the first population ecology study on the green-backed tit in the Himalayas. Using a genetic blind test, we show that green-backed tit males have broader breast stripes than females. We also show that males and females have different beak shapes in winter but there is no significant difference in beak shape in summer due to male beaks becoming shorter.