Modeling the chemistry of planetary atmospheres: implications for the bulk compositions of giant planets 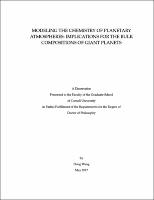 The oxygen abundances of giant planets potentially constrain the conditions of the protoplanetary disk and formation models of planetary systems. In our solar system, the abundances of water, the primary carrier of oxygen in the atmospheres of giant planets, are still unknown for all four giant planets. Juno spacecraft, currently orbiting Jupiter, has the objective of constraining Jupiter's deep water abundance (at a few bars to a hundred bars level) through microwave radiometery. A Saturn entry probe is proposed as a candidate for the New Frontiers program, with the goal of making in-situ measurements of Saturn's atmospheric composition. However, it is not likely to reach deeply enough to directly measure the deep water abundance. There are no planned missions for the atmospheres of Uranus and Neptune. Disequilibrium species have long been used to constrain the deep water abundances for Jupiter and Saturn. In this dissertation, we aim to improve the chemical constraints on the deep water abundances. For Jupiter, we improved the chemical constraints on the deep water abundance by CO. We proposed a new formulation for the deep eddy diffusion coefficient by analyzing the experimental studies of turbulent rotating convection. We considered two updated CO kinetic models, one model constrains the water enrichment (relative to solar) to be between 0.1 and 0.75, while the other constrains the water enrichment to be between 3 and 11. Our study quantitatively accounted for the uncertainties on the constraints due to different reaction rates. We also predicted that the abundances of disequilibrium species should have latitudinal variation due to the latitudinal dependence of the eddy diffusion coefficient. Such variations have been confirmed by VLA measurements \citep{Giles16}, however, the measured dependences are different from our predictions, which merits further investigations. For Saturn, we proposed an approach to break the degeneracy between the deep water abundance and the deep eddy diffusion coefficient when interpreting the CO observations. We identified another disequilibrium species, C$_2$H$_6$, whose abundance only depends on the deep eddy diffusion coefficient, but not the deep water abundance. A shallow entry probe may have the ability to determine both the CO abundance and the C$_2$H$_6$ abundances through a mass spectrometer, therefore, constraining the deep water abundance and eddy diffusion coefficient simultaneously. The transit spectroscopy provided an opportunity for constraining the composition of extrasolar giant planets. JWST should be able to collect the highest quality transit spectra in the future. For extrasolar giant planet atmospheres we expect to measure and retrieve the abundance of the most abundant molecules, such as H$_2$O, CO, and CH$_4$. Other molecules, such as H$_2$S and PH$_3$, have been observed in Jupiter and Saturn but their chemistry and detectability in strongly irradiated planets is highly unknown. Can JWST detect them? Are they important in the chemistry for these exoplanets atmospheres? To address these questions, we model the chemistry of phosphorus and sulfur in hydrogen-rich atmospheres including the effect of vertical transport. Using the abundance profiles computed for major C/N/O/S/P bearing species, we model the JWST primary and secondary transit spectra for systems with a Sun-like star at a distance of 50 pc and with different levels of insolation. We find PH$_3$ is detectable in the transmission spectra for planets with $T_{\rm eq}$ $<$ 500 K using the NIRCam instrument with LW grism mode and F444W filter, and the H$_2$S is detectable in the transmission and emission spectra for planets with $T_{\rm eq}$ $>$ 1500 K using the NIRCam instrument with LW grism and F322W2 filter. Our results specially highlight the importance of including H$_2$S for future abundances retrieval with JWST.