ELECTROSPUN FIBERS FROM BOTH SOLUTION AND MELT: PROCESSING, STRUCTURE AND PROPERTY 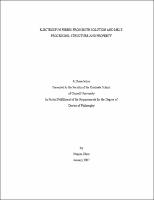 Electrospun Fibers from Both Solution and Melt.pdf   (13.02Mb)

Electrospinning, in which a droplet of polymer liquid is elongated by the action of a strong electrical field, is an effective method to produce submicron scale fibers. The resulting nanofibers are collected as non-woven mats with large surface area to volume ratios which can be used in filtration, catalysis, tissue engineering and reinforced composites. Studies on electrospinning, however, have been limited to relatively simple polymeric systems and researchers have just begun to scratch at the surface of the structure and morphology of various sub-micron scale fibers. To achieve a fundamental understanding of material-processing-structure relation during nanofiber formation, the following three systems have been investigated experimentally. First, the formation of nanofibers from polylactic acid (PLA) and its nanocomposite solutions has been studied to investigate the effects of inclusion of silica nanoclays. It is observed that the inclusion of nanoclays gives rise to strong cold crystallization, formation of beta crystals and structural orientation in PLA fibers. Electrospun PLA nanocomposite fibers also exhibit improved mechanical properties due to the preservation of intercalated structures and further alignment of nanoclays throughout the entire fiber. We further studied the effect of inclusion of polyethylene oxide (PEO) on PLA fibers. The mechanical properties of PLA are greatly affected by the addition of PEO. Electrospun PLA/PEO blend fibers with less than 10wt% of PEO exhibit increased elongational modulus, yield strength and breaking strain. Secondly, we have created a unique route to nanofibers directly from the melt which eliminates the organic solvents present in solution electrospinning. This new solvent-free approach not only allows us to investigate a rich array of experimental studies to develop novel nanofibers directly from polymer melts and composites but also opens the door to theoretical routes to model nanofiber formation without the complications associated with solvent evaporation. Sub-micron PLA fibers have successfully been electrospun from its melt by investigating the effects of a series of processing parameters on fiber diameter. The degradation during melt electrospinning has also been studied. The third system is an extension from melt electrospinning, which is heated solution electrospinning of polyolefin. We explored the possibilities of electrospinning sub-micron polyolefin fibers directly from their solutions and investigated the effects of processing parameters on fiber morphologies and properties.