Towards a Programmable Dataplane 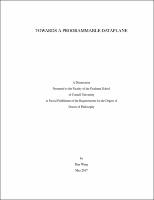 Programmable network dataplanes can significantly improve the flexibility and functionality of computer networks. This dissertation investigates two building blocks of network dataplane programming for network devices: the packet processing pipeline and network device interface. In the first part of the dissertation, we show that designing packet processing pipelines on hardware can be fast and flexible (programmable). A network dataplane compiler and runtime is presented that generates a custom FPGA dataplane designed and built from a dataplane programming language called P4 (programming protocol independent packet processors). P4FPGA generates designs that can be synthesized to either Xilinx or Altera FPGAs. We have benchmarked several representative P4 programs, and the experiments show that code generated by P4FPGA runs at line-rate at all packet sizes with latencies comparable to commercial ASICs. In the second part of the dissertation, we present a programmable network interface for the net- work dataplane. We show that a software programmable physical layer (programmable PHY) can capture and control the timing of physical layer bits with sub-nanosecond precision greatly increasing precision in network measurements. The benefits of a pro- grammable PHY is demonstrated with an available bandwidth estimation algorithm and a decentralized clock synchronization protocol that provides bounded precision where no two clocks differ by more than tens of nanoseconds.