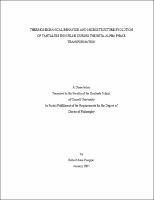 Thin tantalum films were prepared on oxidized silicon substrates in the metastable b phase using an ultra-high vacuum sputter deposition system. Stresses that arose in the films due to interactions between the film and substrate during thermal cycles from room temperature to 700?C were measured using an in situ substrate curvature measurement system, allowing oxygen content to be controlled during both deposition and thermal cycling. X-ray diffraction experiments were used to determine crystal phase and orientation before and after cycling. The transformation from the b phase to the stable a phase takes place in conjunction with a distinct jump in stress in the tensile direction. The magnitude of the jump and the temperature at which it occurs were strongly affected by the amount of oxygen to which the film is exposed and whether the exposure took place during deposition, between deposition and thermal cycling, or during thermal cycling. Increasing oxygen content inhibited the phase transformation, requiring higher temperatures to complete it. It is shown that the phase transformation must occur by thermally activated hopping of atoms across the phase boundaries, and it is proposed that oxygen added to the system inhibits the transformation by slowing boundary motion through solute drag. The microstructure of phase-transformed films were studied using electron backscatter diffraction (EBSD). A unique, previously unobserved microstructure was found, characterized by smooth, continuous gradients in crystal orientation of up to 4?/mm over distances of up to 6 mm within individual grains. Rotation axes were analyzed using rotation pole figures and compared to those of dislocation arrays that could cause such orientation gradients to occur. The addition of oxygen during deposition was found to have a large effect on the microstructure, leading to much larger grain sizes, lower angle grain boundaries, and smaller orientation gradients within grains.