Impact of Economic Growth and Industrial Activities on Air Quality in China: Evidence from 118 Cities 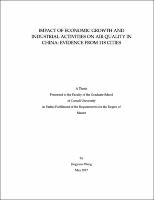 In the past few decades, China’s tremendous economic and social development, and the lack of environmental regulation, has made environmental quality a serious concern. Now the government is going to develop western China and pushes the ’One Belt One Road’ multibillion-dollar infrastructure project. In the context of environmental degradation and China's new push for an "ecological civilization" in the “new normal”, to estimate the environmental cost of economic development in China is very important. A rich literature that examines the effect of economic growth on air quality degradation suggests that there is an inverted-U shaped relationship between the two. However, most of the previous studies of this relationship concentrate on finding the “turning point” of the inverted-U and do not focus on quantifying the impact of economic growth and industrial activities on environmental quality. Neither do they address the potential of an endogenous problem in the relationship. This study estimates the impact that economic growth and industrial activities had on China’s air quality from 2000 to 2012, and it predicts the future impact of economic growth in western China. To deal with the potential of endogeneity, this study constructs instrumental variables (IV) for GDP and industrial output by using the GDP of trading partner countries. With data from 118 Chinese cities, this study identifies the impact of economic growth and industrial output on air quality in China and similar developing areas. The results suggest a quadratic relationship between economic growth and air quality degradation. The estimated marginal impact is stronger than in most previous studies: a 10% increase in secondary industry GDP is associated with a 5% increase in air pollutant concentrations, on average. This impact is largely driven by pollution-intensive industries in the secondary sector.