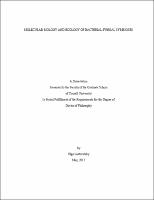 Interactions between fungi and bacteria are gaining attention for their role in human health, agriculture, food production and ecosystem functioning. They are prominent examples of cross-kingdom associations and range from mutualistic to antagonistic. Little is known about how fungi and bacteria interact at the molecular level. I utilized the association between the fungus Rhizopus microsporus and its beta-proteobacteria endosymbiont Burkholderia as a model for understanding mechanisms of fungal-bacterial interactions. I uncovered a mechanism governing symbiosis establishment, which centered on specific alterations in fungal lipid metabolism and showed that these metabolic changes were due, at least in part, to the activity of a previously uncharacterized class of diacylglycerol kinase enzymes. I explored the interaction of endobacteria with the sexual cycle of R. microsporus, showing that, unlike bacterial control over fungal asexual reproduction, control over sexuality is incomplete. This incomplete control was exerted through bacterial manipulation of expression of fungal ras2 which encodes a small GTPase potein. Moreover, endobacteria buffered the negative effects of exogenous cyclic AMP on fungal mating. Furthermore, I reconstructed the molecular dialogues between R. microsporus and Burkholderia in different types of symbioses, antagonism versus mutualism. Fungal cell wall modifications and changes in reactive oxygen species metabolism were central to both types of interactions, whereas bacteria engaged a common set of genes during antagonism as well as mutualism with fungi revealing novel symbiosis factors. Lastly, I conducted an ecological study of arbuscular mycorrhizal fungi (AMF) and their bacterial endosymbionts,‘Candidatus Glomeribacter gigasporarum’ (CaGg, beta-proteobacteria) and ‘Candidatus Moeniiplasma glomeromycotorum’ (CaMg, Mollicutes) in a natural dune ecosystem. I discovered that soil calcium levels correlated with distribution of both types of endobacteria in dune AMF, which was likely linked to the effects of calcium on the host plant. Population structure analyses confirmed the existence of highly diverse CaMg within AMF isolates, uncovered a new clade of CaGg and lead to the discovery of a previously undescribed group of Burkholderia-related endosymbionts in AMF. Overall, I uncovered mechanisms of how fungi and bacteria interact at the molecular level, as well as provided insights into the distribution of bacterial endosymbionts of fungi in the environment.