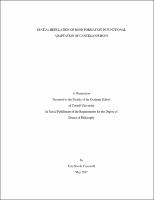 Bone is a vital component of the musculoskeletal system. The morphology and material properties of bone allow our skeletons to support the loads caused from daily activity. Fractures occur when loads exceed the mechanical capacity of bone. Physical forces are a powerful anabolic stimulus that regulates bone formation, bone geometry, and bone density. Forces on whole bones cause non-uniform tissue strains throughout bone’s internal structure. Bone formation is hypothesized to occur at locations of greatest tissue strains. In this dissertation, I examined the relationship between locations of bone formation and local tissue strains in cancellous bone. The rat tail loading model was used to stimulate mechanically induced bone formation. Finite element modeling was performed to determine local tissue strains. High-resolution three-dimensional images were collected to identify osteocyte lacunae and locations of bone formation. The number of bone formation sites was greater in loaded animals than unloaded controls. The additional bone formation sites were attributed to bone adaptation at locations of greatest tissue strains. However, tissue stress and strain were only modest predictors of locations of bone formation (32-41%), and the ability to predict locations of bone formation was not improved by including the local osteocyte density. As an example of bones adapted to high intensity loading, I examined bone microstructure in racehorses. Changes in bone morphology have been associated with increased fracture risk in racehorses. I examined the association between bone volume fraction, exercise history, and fracture incidence in the proximal sesamoid bones. Bone morphology was assessed using micro-computed tomography images of the proximal sesamoid bones in racehorses that experienced a proximal sesamoid bone fracture as well as in control racehorses. Greater bone volume fraction was associated with fracture. Additionally, animals with fractures had a history of longer periods of rest interrupted by shorter periods of high speed exercise. The ratio of the total number of weeks with high speed exercise to the number of weeks of rest (work-to-rest ratio) was less in animals that sustained a fracture. In summary, mechanically induced bone formation occurred at regions of trabecular microarchitecture that experienced the greatest tissue strain. Locations of bone formation were regulated by the local tissue strain, independent of local osteocyte lacunar density. Whole bone density was influenced by exercise, and in the case of racehorses, greater amounts of rest was associated with greater bone volume fraction and fracture risk. Therefore, alteration of the training/racing schedule could regulate bone density and decrease fracture risk.