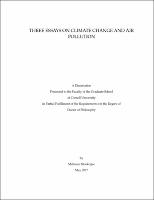 In my dissertation, I have studied the link between the Earth’s changing climate and air pollution. As we know, air pollution is an externality of any major industrial activity, day to day vehicle use, electricity generation etc. I establish the fact that rapidly changing temperature and rainfall patterns exacerbate the levels of multiple air pollutants, thus entailing larger social costs of the above mentioned activities. From a policy perspective, such estimates are crucial to reach the socially desirable level of emissions and technically, this exogenous causal link from climate change to pollutant formation can be used to get more precise estimates of the health consequences of air pollution. In the first chapter, I analyze the impact of climate change on particulate air pollution, which has the most sever health consequences. Using daily weather data, daily data on PM10 from 1990-2013 and daily data on PM2.5 from 1997-2013, I find the first causal estimates of the level of precipitation as well as the precipitation frequency on particulate matter concentrations in ambient air. Using my findings, I exploit exogenous rainfall variation in an instrumental variables approach to also estimate the effect of increases in ambient particulate matter on the number of infant deaths. My estimates suggest that a 1 ug/m3 decrease in ambient PM10 concentrations would imply almost 27 fewer infant deaths per 100,000 live births. In my second chapter, we propose a novel approach to estimate adaptation to climate change based on a decomposition of meteorological variables into long-run trends and deviations from those trends (weather shocks). Our estimating equation simultaneously exploits weather variation to identify the impact of weather shocks, and climatic variation to identify the effect of longer-run observed changes. We then compare the short- and long-run effects to provide a measure of adaptation. We apply our methodology to study the impact of climate change on air quality and estimate the so-called climate penalty on ozone. We have three main findings. First, a temperature shock of 1 degree C increases ozone levels by 1.7 ppb on average. A change of similar magnitude in a 30-year moving average increases ozone concentration by 1.2 ppb. Second, we find evidence of adaptive behavior. For a change of 1 degree C in temperature, our measure of adaptation in terms of ozone concentration is 0.45 ppb. If adaptive responses are not taken into account, the climate penalty on ozone would be overestimated by approximately 17 percent. Third, adaptation in counties with levels of ozone above the EPA’s standards appears to be over 66 percent larger than adaptation in counties in “attainment”. This difference is what we call regulation-induced adaptation. The remainder is our measure of residual adaptation. In the final chapter, we present a theoretical model that looks at a federal air pollution regulation and tries to analyze the variablity in attainment and non attainment designations of counties. Since many areas in the United States have been in non-attainment for prolonged periods, we argue that it must be an optimal choice for the counties, driven by parameters among which climate change is a major one. We find that counties having mild enough climate can actually choose to be in non-attainment, even after paying the penalties imposed by the regulation.