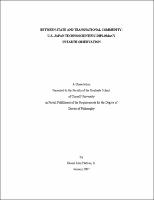 This dissertation examines intergovernmental collaboration in science and technology. In particular, it ventures into a new area of theoretical and empirical inquiry by investigating how scientists and engineers, working on behalf of different states, built an international remote-sensing system and created knowledge about the earth in the absence of the shared social, political, and cultural resources that would have been made available by a shared state or other shared authority, such as an international organization or treaty regime. In contrast to two prominent interpretations of scientific activity in the international arena, namely science as an idealist epistemic community and science as a Hobbesian imperial endeavor, the dissertation offers an explanatory interpretation that accounts for the creation of scientific knowledge and the development of international order by analyzing U.S.-Japan collaboration in remote sensing as a kind of international negotiation that I call "technoscientific diplomacy." Through this technoscientific diplomacy, U.S. and Japan scientists and engineers, working on behalf of their governments, accomplished something that had never been previously accomplished: they developed and operated in near-real time a space-based remote-sensing instrument, its ground data and information system, and an international political economy of scientific data, all under the management of two states.