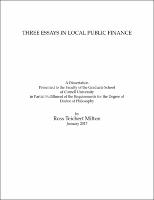 This dissertation studies local government taxation. I study whether changes in local tax levels impact alternative sources of revenue, how tax changes to fund school facilities affect property values, and how tax limits should be set to maximize the welfare of voters. In the first essay, I study private donations to public school districts, which while primarily publicly funded government entities, most districts receive. I estimate how local school taxes crowd out private, voluntary contributions to public education. To do this, I exploit quasi-experimental variation in tax revenue stemming from local elections. I collect data from a large set of referenda in which local taxes face voter approval in four Midwestern states, combined with administrative records of the sources of school district revenues. Using a regression discontinuity design around voting thresholds that determine passage of local referenda, I show that private contributions to public school systems are not crowded out by local taxes. The second essay uses variation in school facilities from local elections to approve capital investment to study whether improved school facilities change the property values of homes in Ohio. These elections allow me to use a regression discontinuity design around the voting threshold that allows school boards to issue bonds. I find no evidence that that is the case in Ohio, in contrast to other researcher’s work in California. The third essay, which is joint work with Stephen Coate, studies the optimal design of fiscal limits, a common feature in local public finance, in the context of a simple political economy model. The model features a single politician and a representative voter. The politician is responsible for choosing the level of taxation for the voter but is biased in favor of higher taxes. The voter sets a tax limit before his/her preferred level of taxation is fully known. The novel feature of the model is that the limit can be overridden, with the voter's approval. The paper solves for the optimal limit and explores how it depends upon the degree of politician bias and the nature of the uncertainty concerning the voter's preferred level of taxation.