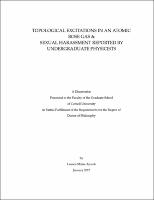 Cold atoms are highly tunable and controllable systems that can explore the impact of quantum statistics on many-body physics and realize topological states. This thesis presents three experiments toward these goals: 1. We implemented a measurement technique to optimize imaging of s-wave scattering halos in degenerate Fermi gases (DFGs) and took preliminary steps toward realizing effective p-wave interactions. 2. We launched solitons in elongated Bose-Einstein condensates (BECs) and observed a soliton’s Brownian motion. We also showed that a dilute background of impurities dramatically effects the soliton. The added impurites scatter off the much larger soliton, contributing to its Brownian motion and decreasing its lifetime. 3. We created a hybrid two-dimensional (2-D) lattice with synthetic flux. This hybrid 2-D lattice was only three sites wide in one dimension, ideal for studying edge states. We directly imaged the localized edge and bulk eigenstates of BECs in this quantum Hall ribbon. Further, we observed both the skipping orbits of atoms traveling down our system’s edges and a universal dynamical Hall conductivity. For future studies, loading a soliton into a Bose quantum Hall ribbon would add the complexity of interactions. In the remainder of this thesis, I turned my attention to the study of the community of physics, focusing on a measurement of sexual harassment experienced and observed by undergraduate women while studying physics. We conducted an internet-based survey (n = 522) of attendees of the American Physical Society’s (APS) Conferences for UndergraduateWomen in Physics (CUWiP) to measure the extent to which attendees personally experienced or observed sexual harassment in a context associated with physics. Forty-nine percent of the respondents reported having experienced sexual harassment in physics and forty-eight percent of respondents reported ‘sometimes’ or ‘often’ observed harassment in physics. Sexual harassment contributes to a chilly or unwelcome climate for both harassment targets and observers. It is unknown how prevalent sexual harassment is in the field of physics and whether or not it is a contributing factor to the field’s inability to recruit and retain female students.