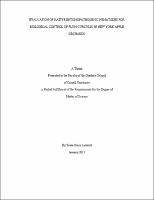 In New York State, apple growers face an increasing number of challenges throughout the season. In this region where water and sun are plentiful, insect pests are one of the most prominent concerns. Historically, growers have relied on a regular schedule of chemical insecticides applied with an airblast sprayer. However, recent legislation has brought on use restrictions and losses of commonly used insecticides. This along with the consumer’s push for safer and more environmentally friendly produce is what inspires researchers and professionals to look for alternative pest management strategies. Entomopathogenic nematodes are soil-dwelling roundworms with free-living and insect-dependent life stages. Since the early 20th century they have often been mass-reared and used as a biological control agent. Success has varied greatly among cropping systems, pest species, and nematode species. Plum curculio was chosen as a good candidate for control with entomopathogenic nematodes because plum curculio spends a large portion of its life cycle in close contact with the soil. Control with entomopathogenic nematodes is especially attractive because only the adult stage appears in the canopy where they are accessible by insecticides. In this study, we set out to gain a better understanding of orchard characteristics conducive to the establishment and virulence of entomopathogenic nematodes in apple orchards. We collected data on soil texture, water holding capacity, water content, and carbon/nitrogen content. These data could then be utilized to help understand the results of our bioassays in both laboratory and field settings, in which we were able to compare plum curculio emergence across different sites and nematode treatments. Results from this study indicated, while Steinernema carpocapsae “NY-001” and Steinernema feltiae “NY-04” are virulent against plum curculio in laboratory bioassays, they may be less effective under natural orchard soil conditions. The plum curculio mortality in untreated and treated intact soil columns was not different. In sieved orchard soil, the S. feltiae “NY-04” treated columns had significantly higher mortality rates than untreated and S. carpocapsae “NY-001” cores. Sieved soil treated with both S. feltiae and S. carpocapsae concurrently was not different from S. feltiae treated soil. However, within the intact soil column category, there was no difference in plum curculio emergence in any of the treatments. This leads us to believe that overall soil structure affects the success of these nematode species in this particular system. Soil texture, water holding capacity, carbon content, and nitrogen content all proved to be different among sites.