Judicial Power in Transitional Regimes: Tunisia and Egypt since the Arab Spring 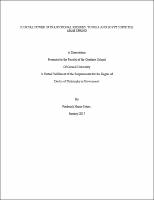 The dissertation examines the origins of judicial power in transitions through the cases of Egypt and Tunisia since 2011. Egypt’s courts, especially the Supreme Constitutional Court, have risen to new levels of prominence, even as the country has returned to authoritarian rule. In contrast, Tunisia - the only Arab Spring transition to result in electoral democracy - dissolved the Constitutional Council and suspended constitutional review for the duration of its transition. The dissertation considers three explanations for these outcomes. First, courts may be countermajoritarian institutions. Second, courts may draw support from civil society. Third, the powers of courts may reflect ideas about the judicial role. Evidence from interviews with judges, lawyers and political parties, and a study of judicial decisions and transitional documents undermine the first two explanations. Instead, the evidence suggests that relations between the courts and the old regime produced a set of ideas about the judicial role that continued to shape the status of courts during the transition. This conclusion sheds light on the role that courts can play in democratization and the strategies that authoritarian regimes can use to co-opt courts.