REBEL PASSIONS: HOW EMOTIONS FUEL THE DIFFUSION OF REBELLION 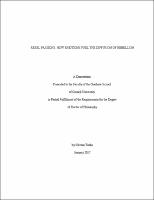 This dissertation examines why rebel movements diffuse from one location to another, and why only some of them succeed in overthrowing their regimes. To date, our theories of the causes and spread of rebellion have focused on either individual rebellions or specific historical instances of its diffusion; as a result, we have no generalized explanation of when and why rebellions are most likely to spread from one location to another, and when they are likely to succeed. In answer to the first question, I argue that a shared identity facilitates the diffusion of rebellion and sets the outer limits of the possible spread: the closer the identity of any two countries – defined by their shared language, religion, ethnicity, and geographic proximity – the greater the likelihood that rebellion will diffuse between them. I discuss two mechanisms of diffusion, cognitive liberation and emotional arousal, which are activated when identity neighbors are already rebelling. The diffusion of rebellion is also more likely if there are opportunity structures characterized by autonomous organizations within a relatively vibrant civil society. In answer to the second question, I argue that one important factor affects the likelihood of rebellions to overthrow their regimes: the size and nature of the opposition. I test this argument using a new dataset of all rebel movements between 1945-2013, as well as interviews with political actors. My mixed method framework employs a crossnational regression, and compares rebellions that fail to replicate with others that do. The largest focus of the dissertation is on the so-called Arab Uprisings of 2011. I examine why the Tunisian revolution spread only within the Arab world, and the reasons for the variation between Arab countries. Evidence from both the large-n study and case studies of the Arab uprisings suggest that the spread of rebellion is strongly associated with both shared identity and opportunity structures, and that the opposition’s ability to mount a large and cohesive mobilization against the regime largely determines the outcome of rebellions.